The News: A User’s Manual by Alain De Botton 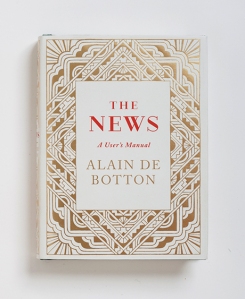 I’ve just started reading this by Alain De Botton, founder of the wonderfully thought-provoking School of Life. He’s fast becoming one of my favourite authors to read, and I remain amazed as to how he managed to write a whole chapter on the process of taking Tuna from the sea to the shelf, and make it not just interesting, but fascinating. Maybe that says more about me… 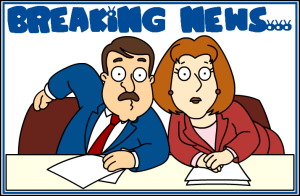 The first thing I do every morning is check the news. Then I spend some time on Twitter. Then, just before getting off the train before 9am, I check the news again. And I have ‘breaking news’ notifications sat up on my phone, which are no-where near as exciting as they used to be , when real TV programmes were interrupted with dramatic annoucements.

I started to worry about the 24 news cycle recently whilst watching live coverage of a plane circling Gatwick as the pilot tried to fix the landing gear. Experts were rushed in to the studio, nearby residents sent in photos of what they could see, and live Twitter posts were read out creating the impression of a gripped nation. The only sanity was brought by one of the experts who repeatedly said the same thing over and over again: ‘It’ll be fine. It’s not a big problem. The pilots are trained for this. They’ll burn off fuel, then land.’

Despite incessant probing from the news anchor, his stance remained the same. And lo and behold, that’s exactly what happened.

Minutes after the plane has safety landed with no fuss at all, the news moved on. And the incident wasn’t mentioned again, not even on the main 10pm news that night. I wondered whether it was their fault for reporting it, or my fault for wasting time watching it, perhaps hoping for some drama that I could say I watched live or tweet other news-addicted viewers about. I’m hoping this book helps cure me!