British people will talk about pretty much anything if it avoids awkward silences. Coffee queues around the country are awash with conversation about the price of a rail ticket, last night’s Great British Bake Off, or the particular variant of mildly out-of-sorts weather we’re currently experiencing – ‘the hottest day of the year, and the best for small talk’. However, whilst we’ll happily swap pleasantries about sunshine, showers, and Strictly, we’re not so good at chatting about the things that really matter: Religion, Politics, Sex, and Money. The four conversation-killers that have the biggest impact on how we live our lives.

Don’t believe me? Try asking the below questions at the next dinner party you’re at, then sit back and watch what happens…

Religion – Do you believe in God?

Religion, or rather, your beliefs on the creation of, meaning of, and what-happens-after life, is an intensely personal thing, requiring huge faith in something which, frankly, we’ll not know the real answer to until *just* after it’s too late. In past generations, it maybe seemed easier. For example in Tudor times, you were Catholic, and if not, you were burnt at the stake. Or you were then Protestant, and if you weren’t, you were burnt at the stake. Confusing with hindsight, but at the time I’d imagine it was pretty straight-forward to talk to people about what religion you were. In centuries gone by, religions were aligned with geographical barriers too, and hence a far higher likelihood of your belief system being shared with your friends, family, and prospective spouses. In today’s world, not only are many religions spread across the world, but the rising tide of both mild and militant Atheism has added a whole new dimension to those irregular conversations.

Politics – Who did you vote for in the last election?

The secrecy surrounding our political preferences is hammered home to us from an early age. I remember accompanying my Mum to a voting booth when I was a child, and watching with interest as she disappeared silently behind a curtain into a secluded booth, before solemnly placing a small piece of paper into a heavily-padlocked box. Talk about general politics is quite usual and welcome, focussing on the individuals’ personalities, sandwich-eating skills, or sharing the view that ‘they’re all the same in the end’. But could I really say which party each of my close friends votes for? Maybe only one or two. In fact, just the other day a relative asked me who I voted for, and almost immediately apologised before I’d had the chance to happily answer.

Come to think of it, I don’t know a single person who voted for UKIP in the recent European elections – or at least, no-one has admitted it. Given their victory, and the current polling lead they have in my hometown of Clacton where there’ll shortly be a by-election, surely I must know someone?

See. We *really* don’t like talking about sex – and I’m going to reinforce that view by saying no more. (Except to take the opportunity to question this whole ‘men think about sex every 7 seconds’ thing. I’m often sat at the Emirates stadium for 90 minutes at a time watching the mighty Arsenal football club, and I can assure you sex doesn’t enter my mind then. Don’t get me started on Antique’s Roadshow.)

Money – How much do you earn?

Unless you’re a recruitment consultant, this feels like an odd question to ask, let alone answer. I remember being cornered by one of the aforementioned consultants in an Indian restaurant, who asked me that in front of a group of my friends. It was noticeable that as well as me being slightly uncomfortable being asked (‘well, I mean, it’s a complicated overall benefits package’), but also the discomfort of my friends who were in earshot. I asked the question at a presentation once too, asking the audience to raise their hands if they earned more than £50k. With people understandably reticent, I made it easier, suggesting they just raise their hand if they thought they earned more than the person sat to their right…

Why do these four stomach-tightening topics cause us so much more discomfort than jovial chats about Jay-Z and Beyonce’s beautiful baby Blue?

The thing is, these topics are inherently deep-seated within us, reflecting our most personal decisions and beliefs (in fact, they’re quite well aligned to Maslow’s ‘Hierarchy of Needs’). Revealing them is a risk. A risk that people will disagree, may judge us, or may even be offended, leading to confrontation. This perception of risk leads to a fear of exposing our deepest feelings, worried about being mocked or challenged on something which, for some things, there may be no tangible evidence you can point to for why you feel or act the way you do. They reveal the inner workings of how you live your life, potentially opening you up to judgement and even guilt if people see you doing something which is out of line with your beliefs.

Yet these are some of the most important decisions we’ll ever make – how to live your life; who to run your country; when to spend and save, and who to spend your life with. Being unwilling to talk about them means that we stick to what we (think we) know, suffering from ‘confirmation bias’ – a tendency to find and interpret information in a way that supports what we already believe. Therefore, we tend to form our opinions from a small group of usually like-minded individuals, and sitting comfortably in what Eli Pariser calls ‘The Filter Bubble’. For example, most Conservatives on Twitter follow other Conservatives, and the same for the other Political parties, meaning that all day their newsfeed is full of people saying things they agree with, and agreeing on the things they disagree on. We nearly all read newspapers that align with our existing thinking. Willingly or unknowingly staying inside this bubble can limit your choices, opinions, conversations, and experiences – and ultimately lead you to make more ill-informed decisions. 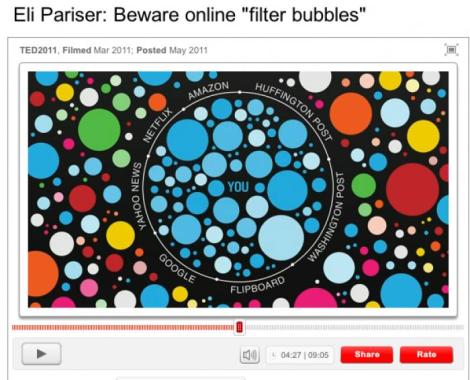 So what to do about this?

Deliberately follow people you disagree with on Twitter, buy books you wouldn’t normally buy, and maybe even watch Channel 5 occasionally. Do as Martha Gill said, and accept that ‘the best way to find the truth to something is to avoid taking a stance’,  leaving you free to enjoy the conversations around those topics without the burden or being right or wrong. Argue the opposite point, and see where that gets you. Write down all the reasons that you’re wrong, and practise ‘How to be wrong’. Maybe read a different newspaper, once in a while. Finally, listen to what Maria Popova says far better than I could in her ‘7 lessons from 7 years’ article, and ‘allow yourself the uncomfortable luxury of changing your mind … about a topic, an ideology, or, above all, yourself‘.

As I said at the start, there really is no secret to good decision making. But by arming yourself with a good spread of information and allowing yourself space to change your mind, you’ll be doing your future self a favour, when that familiar feeling of hindsight kicks in…