A quick thought on Christmas…

In amongst the Mariah, Macaulay, and Mistletoe madness in the lead up to Christmas, one thing is rarely mentioned – giving a little extra to the men and women who bring things to our houses when we’re too lazy to stand, walk, and get it ourselves.

You might get your paper delivered, you’ve probably had some food delivered, and unless you’ve managed to unsubscribe from every piece of junk mail (whilst migrating all friends to online charity Christmas cards) you’ll definitely have had your post delivered.

My wife and I were chatting about this on the train the other day, deciding how much we’d be giving to each of them this year.

The Milkman was definitely getting a tip (insert your own Carry On joke here). It’s his own business, we know his name, and he gives us little notes when he’s going away so we know the delivery days might change. And the people who deliver our Fruit and Veg (a quite brilliant company called Riverford) were also getting something. We really believe in what they’re trying to do as a company, love the short articles they write each week on sustainability, and again, know the names of the couple who run the scheme for the area we live in. 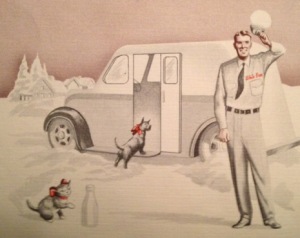 We’d mentally put the money into the cards, sealed the envelopes, and left them by the front door. Then we realised we’d forgotten about the guy who delivers our paper on a Sunday. He delivers just as often as the food people, gets up pretty early, and works on a Sunday, so was surely just as deserving.

As we tried to work out why he hadn’t crossed our minds, it seemed to come down to two things. Firstly, we didn’t know him. We didn’t know his name, had never seen his face, and weren’t even sure what car he drove (although we knew was loud, and arrived early in the morning…) Secondly, there was no connection to what he (or his company) were doing. With the Milkman and Riverford, we felt like we were supporting people trying to do something they really believed in, either with their own business, or for a cause that we felt associated with. The poor paperboy from the chain newsagents a couple of miles away just couldn’t compete with our feelings for the others.

Then the train arrived at the station, the conversation ended, and we rushed to join the thousands of others picking up last minute stocking-fillers – and I didn’t really care where we bought them from…