I originally wrote this article for a brilliant new website – http://openforideas.org – which is an online magazine focussed on opening up creativity for everyone. It’s about sharing practical skills and techniques so that we can all get better at coming up with ideas. Please check it out, and sign up for the newsletter to get brilliant thoughts from some great writers. And me.

About 15 years ago, I heard the most ridiculous idea I’ve ever come across.

A guy I hadn’t met before (and haven’t seen since) trapped me in a corner at a party to give me an enthusiastic and over-detailed explanation of his million-pound-making innovation, cutting me off from the rather impressive buffet that had been assembled. I figured the best approach would be to listen, smile, nod politely, then make my escape towards the vol-au-vents.

He told me that he’d invented a new form of transport – a multi-person taxi-bike, capable of holding up to eight people. This taxi-bike would be available for hire to groups of people who wanted to get from A to B, but didn’t want to order a normal taxi. They’d choose this method because a) they like being in the fresh air and b) they would be able to access the network of special bike-taxi lanes that were going to be built right across the city, taking priority over cars and buses. It could even fold up for overnight storage.

I couldn’t bring myself to lie and tell him it was a good idea. What if it rained? How often would a group of 8 people need to get from A to B together, but not be in a rush and so have plenty of time to cycle? What if they weren’t all physically fit? And if there were only 4 of them, could they still use it, or would the effort become too great? Why on earth would the council permit these things on the road at all, let alone build them special lanes?

Having delivered my damming verdict, I wandered over to grab a beer, and thought no more about it.

Until I saw this, ten years later:

The brilliant writer Stephen Johnson once said that the trick to having good ideas is ‘not to sit around in glorious isolation and try to think big thoughts. The trick is to get more parts on the table.’ It’s all very well connecting the dots, but to do it right, you have to have enough dots to connect.

When I first heard the taxi-bus idea, I was thinking in isolation. I compared the idea to existing forms of transport, finding all the problems this had compared to those.  Whoever came up with the beer-bike idea (and I hope it was the person I met) was thinking more broadly. 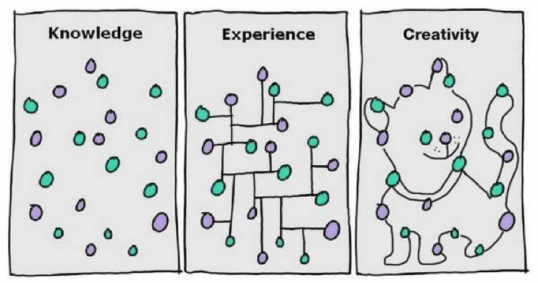 It’s great to have insight, but just having a couple of perspectives will usually lead to an obvious and binary idea, an incremental improvement on the ways things are. Real creativity comes from making connections between a broad range of information, throwing together the obvious with the not-so-obvious, and seeing what interesting things emerge.

So, how do you get more parts on the table? Here’s three ways to find new perspectives: